We meet in the presence of God
who knows our needs, hears our cries,
feels our pain,
and heals our wounds.

This week’s sermon is from Rev Joop Albers.

May the words of my mouth and the meditation of my heart be pleasing to you, O LORD, my rock and my redeemer.

It is wonderful to be with you today. It is the first Sunday in three months that I am able to share Word and Sacrament with real people in real church and a familiar place. I must admit, that I also enjoyed the live steaming services in the weeks gone by. I really felt that I was there and belonged there too. But to see people face to face is an essential dimension of being Church. And this is happening today.

You may have heard these words many times in recent weeks after the killing of George Floyd in the United states. On television we see real people protesting against racism, against the superiority of many other people of a different culture or colour. I hope and pray that these protesting voices will be heard and taken seriously. That all governments, and indeed people of all nations, realise that discriminating people isn’t a christian way.

A lot of the protesting is also about slavery. Dutch and English slave traders were ‘successful’ in moving people from one continent to another. Mainly Christian countries were involved in this business. This week I learned that the older churches in the Netherlands also benefitted from this trade.

We might think that slavery is something from the past. It is dangerous to consider this as an episode in history. We might think that we are doing things better. Slavery, indeed, still happens today, in our society, in our world, the so called civilised world.

A couple of months ago I was shocked by a message on this topic of slavery. A PhD student and an economist – lest we not forget that this student is a committed Christian – wrote a revealing dissertation on slavery today.

He based his research on international documents.One of the questions was how people in the Netherlands buy products and how the purchasing of these products affected people in the so called third world. After his calculations and further research, his conclusion, was shocking. For everything a Dutch person uses, nearly two slaves are needed, 1.8 slaves to be more precise, I am sure this is applicable to more countries in the West or North for that matter.

Fundamental is that people are not experiencing equality. Human rights aren’t available for everybody.

The famous British author George Orwell once wrote in his book, the well known phrase All animals are equal but some are more equal than others. This book was published 75 years ago is very topical in our days.

This discrimination is not what Jesus wants us to practice. The Gospel gives us an entirely different approach. Let’s therefore turn to the Gospel. It is about the way people relate to each other.

A disciple is not above the teacher nor a slave above his master.

The world in Jesus’ time wasn’t a better world than ours today. Indeed, in his time there was also slavery. Some people were treated second rate. It was up to the master of the house to do with his slaves whatever he liked to do. Slaves were something rich people possessed. Slaves could be bought and sold. Human dignity was out of sight.

When Jesus mentions the master, he made it more explicit. If they have called the master of the house Beelzebul, how much more will they malign of his household.

Beelzebul stands for Satan. His household is not example of Christian discipleship. Obviously Jesus wants God’s kingdom to come and not the reign of Beelzebul, nor that of his household. We know that the entourage of dictators also benefit from the wealth. In fact that turns them into slaves as well.

Beelzebul is placed in our text in contrast with the household of the God of Abraham, Isaac and Jakob. The question to us is to which household we want to belong to. The household of Beelzebul is a realm of demons, sinful and unjust practices. Indeed the household of God asks us to be a true disciple and to follow him. Surely, this is not easy. It is easier to conform with society, it easier to close your eyes for issues such as racism.

Just to inform you, the Church of England pays attention to the so called Windrush generation. On June 22, 1948, the ship HMT Empire Windrush landed at Tilbury Docks just east of London, bringing with it the first immigrants from the Caribbean. The ship’s name inspired the term, the Windrush Generation, to denote the large-scale influx of Caribbean immigrants during the years that followed. These Afro Caribbean immigrants were met with extreme intolerance from large parts of the white population. Many early immigrants were denied access to private employment and accommodation on account of their skin colour. Black people were also banished from many pubs, clubs, and even churches.

This happened 70 years ago.

With the gospel text in mind, is there something more to be said? All people are valuable in God’s sight, black or white, rich or poor, regardless our social status. God made us all in his image. He looks after us all, he cares about us.

The gospel mentions to sparrow sold for a penny. No one will fall onto the ground apart from the Father. No sparrow excluded, no human being excluded. We are of more value that many sparrows.

In the Name of the Father and of the Son and of the holy Spirit. Amen.

Intercessions for the Second Sunday after Trinity.

Heavenly Father the light of your revelation brought the Disciples the gift of faith in Jesus your Son. Through their proclamations from the housetops many came to faith and so we give thanks for that faith we have inherited in Christ Jesus, and for having been enriched by him in knowledge and love.

The Lord Jesus built his Church on the apostles. United with them, in faithfulness to the Gospel’s teaching and way of life, we pray for our individual and communal roles in this Chaplaincy. We pray for our bishops, that they grow in union with all the saints, share the zeal of the first Disciples, and lead us by the grace of the Holy Spirit,

Heavenly Father we pray for all who, like the apostles, are persecuted for their faith, and for each of us, that we might be faithful when we are ridiculed or insulted for practising our religion. We pray for the poor and the oppressed, and those who live in war-torn parts of the world.

Heavenly Father we pray for the sick and the suffering. For those undergoing treatments and surgery and those who have contracted the Corona Virus. For those convalescing and those who are recovered, that through the intercession of the apostles, that they may all experience the light of the Gospel,

Heavenly Father we remember those who have been united to Christ in a death like his and those whose faith is known to you alone, and we pray that they will be united with Christ in his resurrection

Heavenly Father we rejoice in the call to belong to the Church, to believe in the Gospel, and to be united with the successors of your Apostles.

Merciful Father: Accept these prayers for the sake of your Son our Saviour Jesus Christ. Amen

Jesus, Lord of time,
hold us in your eternity.

Jesus, image of God,
travel with us the life of faith.

Jesus, friend of sinners,
heal the brokenness of our world.

Jesus, Lord of tomorrow,
draw us into your future. Amen. 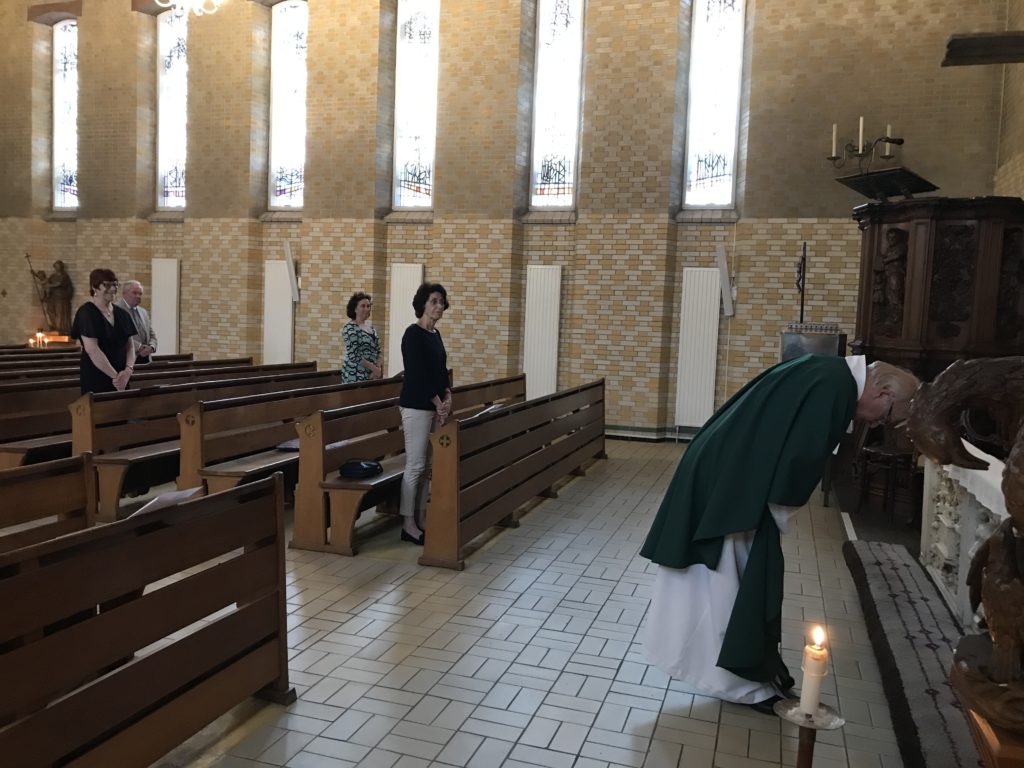