In 2012, Hildegard was canonised and named a Doctor of the Church by Pope Benedict XVI.
Her Liturgical Feast Day is September 17.

When I started preparing this reflection, I had intended it to follow the usual pattern, a single reflection around the commemoration of one of our heroes or heroines. It became apparent that to do so would not be to recognise the diverse and powerful contribution Hildegard made to the church in her day and to Christianity today in one reflection. She clearly is a saint for today rooted as she was in Christ and his life and ministry over 800 years ago.

There will be three reflections, Hildegard, A uncompromising beginning, Hildegard’s Art and Music and finally Hildegard – The Unruly Mystic.

When reflecting on the life of Hildegard we should continually remind ourselves that she lived in the 12th century before the printing press and books, education was minimal, especially for girls and the position of women in the church was clearly to know their place, be quiet and obedient. Life was unrecognisable compared with today in so many ways.

Hildegard was born, the tenth child, into a minor noble family Bermersheim, on the Rhine. It is possible that when Hildegard was young her parents pledged her and her dowry to the Church. As an under 10-year-old she was in the care of a distant cousin, Jutta of Sponheim. Jutta was probably only in her mid teens when she and Hildegard went to the Benedictine Abbey at Disibodenberg.

Later as Abbess of this small community, Jutta instructed Hildegard in the Psalter, reading Latin and strict religious practices. In Jutta’s biography, written after her death by her secretary, the monk Volmar, we discover just how hard life was for the nuns.
A single window linked them to the outside world and they were permitted one simple meal a day. They prayed at regular intervals, following the Benedictine model, throughout the day and night. This hard lifestyle did have detrimental health effects. It is hardly surprising they often complained of weakness and illness.

When Jutta died in 1136, Hildegard was appointed prioress and it was then that she started writing music for the first time, for her nuns to sing as part of the Divine Office. She would have had no formal musical training. She would of course have the experience of growing up hearing the chants of mass and she set her own inspired verses to music to create antiphons, responses, sequences and hymns.

After a period of time when Hildegard was seeking to separate the Monastery from the small cells for the nuns, she was finally able to move. She and about twenty nuns moved from Disibodenberg to Rupertsberg, near the town of Bingen. The consecration of the new church and cloister occurred in 1152.
She died at the age of 81 years after a long and faithful life serving her Lord.
We are blessed that much of Hildegard’s work was written down in the 12th century by Hildegard and her nuns. During the second world war, the documents were moved from Bingen to the vaults in a bank in Dresden. In February 1945 the Allied forces bombed Dresden destroying most of it and killing thousands of civilians. The documents survived.
A sombre note on which to end this very short biographical account of Hildegard of Bingen.
Let us pause silently reflecting on the events of February 1945, letting our silence recognise the pain and anguish caused to the people of Dresden, their descendants and to all who carry the scars of war.

We start our period of prayerful reflection with focussing on the value of community, community of 20 nuns. We need to be careful that to have a romantic view of community, that includes religious communities. The sisters had a daily routine of prayer, study and practical labour, sometimes hard manual labour. Their work would also include the support of Hildegard in her work. Hildegard would have found it difficult to achieve all she set out to do without the help and support of others from her religious community.

Let us pause for a moment and recall the various communities to which we belong. At this time hold onto the memories of our faith community, our church. It has been a difficult period; we may still be finding our way back together or getting used to things perhaps never being the same again.

Collect:
O God, by whose grace your servant Hildegard, kindled with the Fire of your love, became a burning and shining light in your Church: Grant that we also may be aflame with the spirit of love and discipline, and walk before you as children of light; through Jesus Christ our Lord, who lives and reigns with you, in the unity of the Holy Spirit, one God, now and for ever.

Psalm 104:25-34
25 People go forth to their work *
and to their labour until the evening.
26 O Lord, how manifold are your works! *
In wisdom you have made them all;
the earth is full of your creatures.
27 There is the sea, spread far and wide, *
and there move creatures beyond number, both small and great.
28 There go the ships, and there is that Leviathan *
which you have made to play in the deep.
29 All of these look to you *
to give them their food in due season.
30 When you give it them, they gather it; *
you open your hand and they are filled with good.
31 When you hide your face they are troubled; *
when you take away their breath,
they die and return again to the dust.
32 When you send forth your spirit, they are created, *
and you renew the face of the earth.
33 May the glory of the Lord endure for ever; *
may the Lord rejoice in his works;
34 He looks on the earth and it trembles; *
he touches the mountains and they smoke.

Heavenly Father, you gather us together in our faith journey
Help us to trust you as we join with others as a community, whether we are physically close to each other or distanced.
May we continue to journey together as a community of faith.
Along the way, remind us of your Love.
Let us never lose hope along our journey.
Help us to be strong.
Strong in Faith.
Strong in love for you and each other
May our journey take to new places,
Places of adventure, hope and service
And the Grace of our Lord Jesus Christ and the love of God and the fellowship of the Holy Spirit be with us today and always. Amen

Next week – Reflecting on Hildegard’s Art and Music 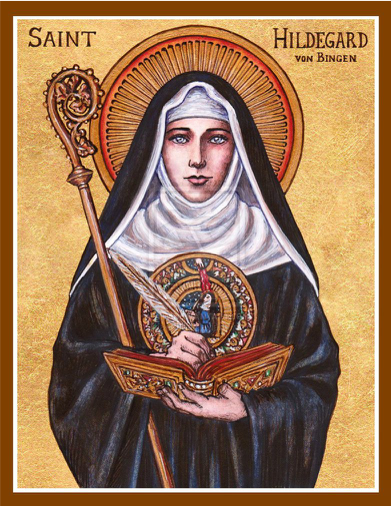