When Isaac Watts was born his father was in prison for his Nonconformist beliefs. Isaac Watts senior could not accept the established Church of England.  As a child Isaac showed that he was a talented young person learning Latin by age 4, Greek at 9, French a little later and going on to learn Hebrew. Isaac also as a small boy showed his love of language and verse. Once, during family prayers, he began to laugh. His father asked him why. He replied that he had heard a sound and opened his eyes to see a mouse climbing a rope in a corner, and had immediately thought,

A little mouse for want of stairs. Ran up a rope to say its prayers.

His father was not amused and proceeded to punish Isaac, leading Isaac to say,

Father, father, mercy take, And I will no more verses make.

Thankfully he did not keep to making ‘no more verse’

Several benefactors offered to pay for his university education at Oxford or Cambridge but Isaac refused and studied at a leading Nonconformist academy in London.

After 5 years as a private tutor he became pastor of London’s Mark Lane Independent (i.e. Congregational / United Reform) Chapel, then one of the city’s most influential independent churches.

Isaac Watts became a prolific writer of poems and hymn, well in access of 600 hymns earning the well-deserved tile ‘the Father of English Hymnody’. Sacred music scholar Stephen Marini (2003) describes the ways in which Watts contributed to English hymnody. Notably, Watts led by including new poetry for “original songs of Christian experience” to be used in worship.

Amongst the hymns that still appear in hymn books are:

Jesus Shall Reign Where’er the Sun, based on Psalm 72

Our God, Our Help in Ages Past, based on Psalm 90

I’m not ashamed to own my Lord

When I Survey the Wondrous Cross

Our reflection will focus on three of Isaac Watt’s hymns, two of which you may not know, the final one your will know and there with be a YouTube link to ‘When I Survey the Wondrous Cross’. I invite to read the Cradle Hymn, with the gentleness of ‘Soft and easy is thy cradle’ and the reality of Jesus’ manger ‘Coarse and hard thy Saviour lay . . . And His softest bed was hay’. This is followed by Isaac Watts paraphrase of the words of the Beatitudes, ‘Blest are the humble souls that see, their emptiness and poverty’ and creating a piece of verse that can illuminate the words of Jesus as recorded in Matthew’s gospel.

Almighty God, who gave to your servant Isaac Watts singular Gifts of rendering your praises in verse, that he might write for your Church an abundant supply of psalms, and hymns, and spiritual songs: Stir up the hearts of your people, that they may joyfully sing your praises in this life and the life to come; through your Son Jesus Christ our Lord, who lives and reigns with you and the Holy Spirit, one God, now and for ever.

Sleep, my babe, thy food and raiment,
House and home, thy friends provide;
All without thy care, or payment,
All thy wants are well supplied.

How much better thou’rt attended
Than the Son of God could be,
When from heaven He descended,
And became a child like thee!

Soft and easy is thy cradle;
Coarse and hard thy Saviour lay,
When His birthplace was a stable,
And His softest bed was hay.

See the kindly shepherds round him,
Telling wonders from the sky!
When they sought Him, there they found Him,
With his Virgin-Mother by.

See the lovely babe a-dressing;
Lovely infant, how He smiled!
When He wept, the mother’s blessing
Soothed and hushed the holy child.

Lo, He slumbers in His manger,
Where the honest oxen fed;
–Peace, my darling! here’s no danger!
Here’s no ox a-near thy bed!

Mayst thou live to know and fear Him,
Trust and love Him all thy days;
Then go dwell forever near Him,
See His face, and sing His praise!

I could give thee thousand kisses,
Hoping what I most desire;
Not a mother’s fondest wishes
Can to greater joys aspire.

Blest are the humble souls

for theirs is the kingdom of heaven.             their emptiness and poverty;
treasures of grace to them are giv’n,
and crowns of joy laid up in heav’n.

6 ‘Blessed are those who hunger and

for they will be called children of God.          who quench the coals of growing strife;
they shall be called the heirs of bliss,
the sons of God, the God of peace.

This metrical paraphrase of the Beatitudes appeared in

the enlarged edition of his Hymns & Sacred Songs, 1709.

When I survey the wondrous cross
On which the Prince of glory died,
My richest gain I count but loss,
And pour contempt on all my pride.

Forbid it, Lord, that I should boast,
Save in the death of Christ my God!
All the vain things that charm me most,
I sacrifice them to His blood.

See from His head, His hands, His feet,
Sorrow and love flow mingled down!
Did e’er such love and sorrow meet,
Or thorns compose so rich a crown?

Were the whole realm of nature mine,
That were a present far too small;
Love so amazing, so divine,
Demands my soul, my life, my all.

To God the Trinity

and the mysterious One:

with all her powers, 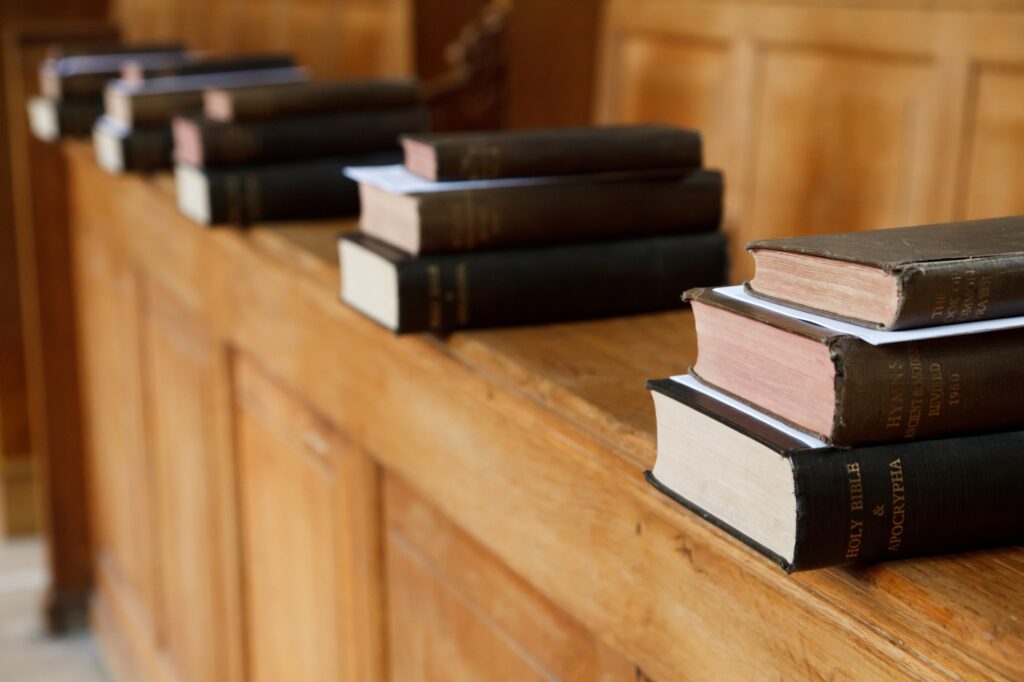