Columcille was one of Ireland’s three patron saints. Columcille also be spelt Colm Cill, we would probably know him better as Columba, the name ‘dove’. He was born in Donegal into a royal and wealthy family, the O’Neil or Ui Neill clan. He has been described as scholar, priest and poet but also a warrior, a prince and a politician. He trained as a monk under Finnian of Moville from an early age at Finnian’s monastery during this time he was ordained priest and was later to establish his own monastery in Derry around 556. The first of a number of monasteries Columcille was to establish.

On a later visit to Finnian became involved in what must be the first challenged breach of copyright. Columcille borrowed a copy of St Jerome’s new translation of the Bible and started to copy the Psalms. Finnian objected and demand Columcille hand over the copy which Columcille refused. There was a ruling by the High Kings of Ireland in favour of Finnian which Columcille ignored. The High Kings were figures who claimed to have a degree of lordship over the whole of Ireland. While it was true that the High Kings’ had a degree of control it varied and they never ruled Ireland as a unified state.

In 561 there was a massacre as a result of a inter tribe/clan feud between the clans of Columcille and Diarmait. It was a dark period but it was not uncommon in the 6th century Celtic life and that of Columcille. He was to be banished from his homeland to Iona. There are two versions on how this banishment came about. Firstly, it was imposed by Columcille. Secondly, it was imposed by his confessor both as a punishment for what he had done. Columcille, according to legend, was instructed to convert 3000 souls to Christianity. This was the same number of deaths in the massacre he caused over the book. 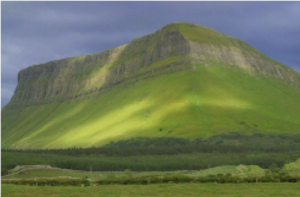 Ben Bulben, site of the battle of
Cul Dreimhne (Battle of the Book)

We will continue to follow Columcille, in the next reflection, but using his other name Columba. My change in the use of names is artificial both his names are used, it seemed appropriate to mark his exile from Ireland and his time on Iona with the name that is associated with the island.

Grant, O Lord, we beseech you,
that the course of this world may be so peaceably ordered by your governance,
that your Church may joyfully serve you in all godly quietness;
through Jesus Christ our Lord.
(Common Worship Post Communion Prayer for Trinity 5)

Psalm 24 (1-6)
The earth is the Lord’s and all that fills it, the compass of the world and all who dwell therein.
For he has founded it upon the seas and set it firm upon the rivers of the deep.
‘Who shall ascend the hill of the Lord, or who can rise up in his holy place?’
‘Those who have clean hands and a pure heart, who have not lifted up their soul to an idol, nor sworn an oath to a lie;
‘They shall receive a blessing from the Lord, a just reward from the God of their salvation.’
Such is the company of those who seek him, of those who seek your face, O God of Jacob.

Mark 6 (17-25)
. . . Herod himself had sent men who arrested John, bound him, and put him in prison on account of Herodias, his brother Philip’s wife, because Herod had married her. For John had been telling Herod, ‘It is not lawful for you to have your brother’s wife.’ And Herodias had a grudge against him, and wanted to kill him. But she could not, for Herod feared John, knowing that he was a righteous and holy man, and he protected him. When he heard him, he was greatly perplexed; and yet he liked to listen to him. But an opportunity came when Herod on his birthday gave a banquet for his courtiers and officers and for the leaders of Galilee. When his daughter Herodias came in and danced, she pleased Herod and his guests; and the king said to the girl, ‘Ask me for whatever you wish, and I will give it.’ And he solemnly swore to her, ‘Whatever you ask me, I will give you, even half of my kingdom.’ She went out and said to her mother, ‘What should I ask for?’ She replied, ‘The head of John the baptizer.’ Immediately she rushed back to the king and requested, ‘I want you to give me at once the head of John the Baptist on a platter.’

Over the last few weeks, we have had reflections that have a Celtic warmth about them. There is much in Celtic Spiritualty that has an earthy comfort about as we read and reflect upon these early saints today. Columcille and the massacre he caused over copying the book without permission vividly and tragically shows us how flawed they could be. The gospel reading for Trinity 6 (Year B) also shows how powerful men can abuse power and treat life as if it is cheap and of no value. The culture in the time of Herod and of Columcille was very much an eye for an eye one, acts of violence were an expedient way to deal with those you disagreed with. Sadly, there are still those who see this as a way to act but we know this does not have to be the way nor should it.

In our prayerful reflection let us hold in our thoughts those who are brutalised because of their faith, the colour of their skin and because they are different to us, they cause no harm, they are just different.

Loving God, we bring to you all those who use Christianity as a political or cultural badge of convenience, whose words and actions, though popular, do not reflect your commands to show love and forgiveness, compassion, justice and peace. Speak to their hearts, Lord, and ours, so that your holy name might never be used for human gain but to draw all people to your love. (* John Birch)

Gracious God, we pray so often that this world might be changed, your light seen in the darkness, your voice heard in the silence, your healing felt in lives that hurt, and forget that often, such prayers are answered first in our hearts, as our lives change and influence those around us, as your light shines from our hearts, your word is seen in our lives, and healing and peace felt in lives we touch. So change us, gracious God, that we might change the world. (* John Birch)

May the peace of God calm your fears through storms of night. May the love of God warm your heart and bring you light. May the word of God give you strength when the body is weak. May the grace of God flow from you to the world you meet
(*John Birch)

Pictures featured are via WikimediaCommons 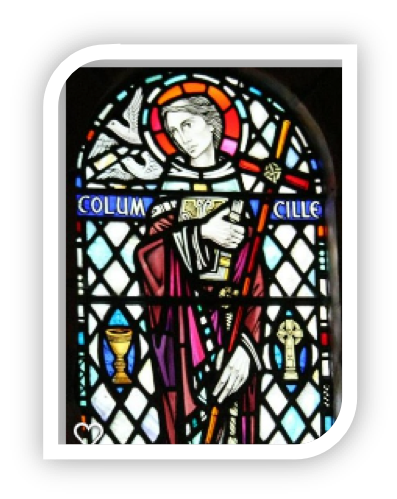