In spite of Columba’s role in the awful massacre, the Battle of the Book, he had been a prolific founder of monasteries in Ireland. His commanding stature combined with coming from a royal family gave him the personality and charisma to build monasteries.

Columba was either banished from Scotland or went into self imposed exile because of the Battle of the Book and the massacre that ensued. Either way it is understood that this banishment or exile was an act of remorse. Legend is that Columba had also to convert 3000 souls. He entered his exile on the island of Iona, a traditional story is that the island was owned by a relative of Columba, King Conall. Columba did not travel alone but with 12 fellow monks and established a monastery on Iona, a place where this new community could pray and one would hope reflect of the terrible events that led to them being on Iona. Columba did return to Ireland occasionally on religious, political and family business, as he was still part of a significant and powerful family.

From his base on Iona, Columba and his fellow monks evangelised among the Picts. The Picts were a clan of Celtic speaking people living in an area, in modern day terms from Caithness to Fife. The name Pict may refer to their custom of body painting.
Columba is also thought to have travelled southward to the Firth of Clyde and Strathclyde.

The 6th century Celtic Monasteries were usually built in isolated places, beside lakes, in woodland or on islands. They were of a plain construction, wood and rough stone. They typically consisted of a compound with simple accommodation, cells, for the monks together with communal building. They could take on the appearance a small village. These early Celtic monasteries in Ireland, Wales and south western Scotland had a distinctive style. The monastery in some incidents became a community of Christians living together. These communities could include monks, priests and laity, men, women, and children.

Psalm 66 1-8
Be joyful in God, all the earth;
sing the glory of his name; sing the glory of his praise.
Say to God, ‘How awesome are your deeds!
Because of your great strength your enemies shall bow before you.
‘All the earth shall worship you,
sing to you, sing praise to your name.’
Come now and behold the works of God,
how wonderful he is in his dealings with humankind.
He turned the sea into dry land; the river they passed through on foot;
there we rejoiced in him.
In his might he rules for ever; his eyes keep watch over the nations;
let no rebel rise up against him.
Bless our God, O you peoples; make the voice of his praise to be heard,
Who holds our souls in life and suffers not our feet to slip.

Luke 10 (25-37) The Parable of the Good Samaritan
Just then a lawyer stood up to test Jesus. ‘Teacher,’ he said, ‘what must I do to inherit eternal life?’ He said to him, ‘What is written in the law? What do you read there?’ He answered, ‘You shall love the Lord your God with all your heart, and with all your soul, and with all your strength, and with all your mind; and your neighbour as yourself.’ And he said to him, ‘You have given the right answer; do this, and you will live.’
But wanting to justify himself, he asked Jesus, ‘And who is my neighbour?’ Jesus replied, ‘A man was going down from Jerusalem to Jericho, and fell into the hands of robbers, who stripped him, beat him, and went away, leaving him half dead. Now by chance a priest was going down that road; and when he saw him, he passed by on the other side. So likewise a Levite, when he came to the place and saw him, passed by on the other side. But a Samaritan while travelling came near him; and when he saw him, he was moved with pity. He went to him and bandaged his wounds, having poured oil and wine on them. Then he put him on his own animal, brought him to an inn, and took care of him. The next day he took out two denarii, gave them to the innkeeper, and said, “Take care of him; and when I come back, I will repay you whatever more you spend.” Which of these three, do you think, was a neighbour to the man who fell into the hands of the robbers?’ He said, ‘The one who showed him mercy.’ Jesus said to him, ‘Go and do likewise.’

Columba’s period exile on Iona was one probably full of guilt and remorse. From this tragedy Columba demonstrated that with repentance and devotion it is possible to turn around. Columba was a tireless evangelist and his mission had immeasurable effect in Scotland and beyond.
He was also a man of prayer and was spiritually refreshed by the long periods in solitude – he was able to reach out to others. He was flawed but nonetheless his love for Christ is still remembered today.
Let us approach this time of prayerful reflection recalling our own flawed nature

In the light of God’s glory our hearts lie exposed, revealing the sin within.
For that which we ought to have done,
to bring a blessing
or word in due season,
forgive us, gracious Lord.
For that which we have already done,
which has caused a wound
or moved someone to anger,
forgive us, gracious Lord.
May these be lives that are devoted
to serving you,
and all whom you would lead us to.

If we, in humility, will confess our sins
in the quietness of our hearts
or in the company of the faithful,
God’s love and mercy bring forgiveness (John Birch) 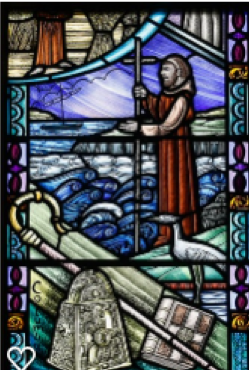