A while ago when part of a Zoom social event with the Anglican Church Haarlem, I received a number of requests for topics to be included in my weekly reflections. One such request was from Martin Van Bleek, the organist and choirmaster to write a reflection on St Cecilia, a patron saint of music and of musicians. 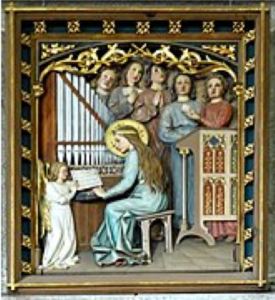 Like so many Saints, writers commenting on their lives have to make a disclaimer. Little is known of the life Cecilia but what we have is legend with no historical reliability. But it is a good story and does provide the opportunity explore how this third century woman would become associated with music and reverenced by many musicians.

It widely agreed that Cecilia was born in Rome in the 2nd century AD into a wealthy family. Some claim she was martyred around 230 AD,

Cecilia was entered into an arranged marriage with Valerian, who was not a Christian. On her wedding night, she requested Valerian not to consummate the marriage, saying that it would upset her guardian angel. Valerian responded by asking to see this angel, and Cecilia said that it would only be visible if Valerian was a Christian. Valerian then accepted Christ, and was able to see the angel of which she spoke.

Valerian was baptized, along with his brother Tiburtius. They later undertook the task of burying those who had been martyred for their faith, this was illegal at the time. The brothers were arrested and pressed to renounce their faith. They refused and were executed. Cecilia was later arrested for burying their bodies and later martyred.

Some of the accounts of her martyrdom are graphic. Firstly, the authorities attempted suffocate her by locking her in a room and heating the furnace to an extremely high temperature. This was unsuccessful. Next, they attempted to behead her but without success. Cecilia lived for three days after the attack before she died.
St Cecilia’s life and death possessed much of what would make her stand out in the early church and lead to her beatification: her courage in the face of persecution, her identification with the virginity and through that to the purity of Mary and her remarkable heavenly visions.

The legend is that Cecilia became the patron saint of music because she heard heavenly music in her heart during the wedding ceremony. It was over a thousand years before we saw clearer musical connections, and art depicting Cecilia often with an organ. It is also worth noting that during the 15th century music was often seen a revelation of the divine.

Sing for the morning’s joy, Cecilia, sing,
in words of youth and praises of the Spring,
walk the bright colonnades by fountains’ spray,
and sing as sunlight fills the waking day;
till angels, voyaging in upper air,
pause on a wing and gather the clear sound
into celestial joy, wound and unwound,
a silver chain, or golden as your hair.

Sing for your loves of heaven and of earth,
in words of music, and each word a truth;
marriage of heart and longings that aspire,
a bond of roses, and a ring of fire.
Your summertime grows short and fades away,
terror must gather to a martyr’s death;
but never tremble, the last indrawn breath
remembers music as an echo may. 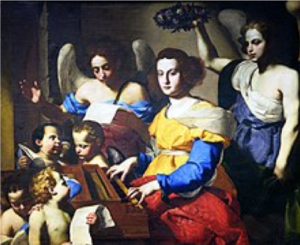 Through the cold aftermath of centuries,
Cecilia’s music dances in the skies;
lend us a fragment of the immortal air,
that with your choiring angels we may share,
a word to light us thro’ time-fettered night,
water of life, or rose of paradise,
so from the earth another song shall rise
to meet your own in heaven’s long delight.

Let us … ‘be filled with the Spirit, as you sing psalms and hymns and spiritual songs among yourselves, singing and making melody to the Lord in your hearts, giving thanks to God the Father at all times and for everything in the name of our Lord Jesus Christ’. (Ephesians 5:18-20)

Collect for St. Cecilia Day
Most gracious God, whose blessed martyr Cecilia sang in her heart to strengthen her witness to you: We give you thanks for the makers of music whom you have gifted with Pentecostal fire; and we pray that we may join with them in creation’s song of praise until at the last, with Cecelia and all your saints, we come to share in the song of those redeemed by our Saviour Jesus Christ; who with you and the Holy Spirit lives and reigns, one God, in glory everlasting. Amen. Source – Unapologetically Episcopalian

For Church Musicians and Artists
O God, whom saints and angels delight to worship in heaven: Be ever present with your servants who seek through art and music to perfect the praises offered by your people on earth; and grant to them even now glimpses of your beauty, and make them worthy at length to behold it unveiled for evermore; through Jesus Christ our Lord. Amen. Source – Unapologetically Episcopalian

Now let us draw into our circle of prayer our:
Family
Friends
Local church and its leaders
wider community
widening our circle to include:
those in government and positions of authority
those who are oppressed
those who are hungry and homeless
those who are ill
those facing death
Merciful Father, accept these prayers
for the sake of your Son, our Saviour Jesus Christ. Amen

May the Lord bless us, and keep us from all harm,
And may we be led into eternal life. Amen 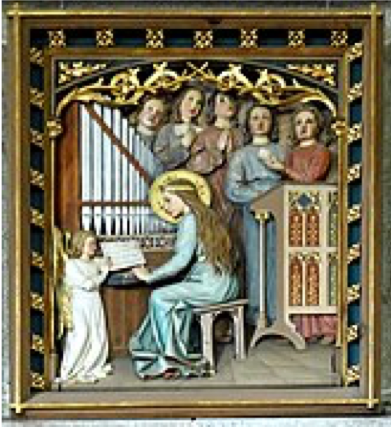